Why does culture-based treatment fail? 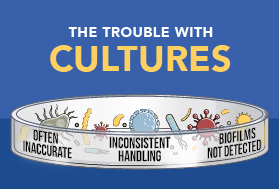 Cell culture methodology cannot identify many of bacterial species present as pathogens in chronic infections, and fails to identify the most abundant species 70% of the time. Culture misses microbial species in biofilms and complex polymicrobial infections, and fails to identify antimicrobial resistance potential in these microbial communities. In contrast, MicroGenDX qPCR+NGS is capable of providing a more accurate and actionable microbial infection profile in chronically infected patients. This is why 16S DNA sequencing is increasingly becoming the gold standard in diagnostic technology for infections.

Viable but nonculturable (VBNC) — Known human pathogens such as E. coli, K. pneumoniae, E. faecalis, and Pseudomonas aeruginosa are capable of entering and resuscitating from a VBNC state without losing their virulence. During the VBNC state, microbes maintain their cellular structure, biology, and significant gene expression – which allows detection by molecular testing. While in the VBNC state, these pathogens are nonculturable by standard laboratory methods.

Specimen degradation — Specimen stability is estimated to be 24-72 hours for traditional culture, depending on transport media and temperature. Delay in sample pickup and transport can lead to false negative results. Microbial DNA is protected by microbes for longer periods of time, hence is less affected by degradation that can render the specimen culture negative.

Lack of anaerobe and fungal detection — Prevotella, Veillonella, Fusobacterium, Porphyromonas, Finegoldia magma are frequently detected anaerobes.  Synergistic pathogenicity between aerobic and anaerobic bacteria stress the importance of anaerobe detection. Recognition that anaerobes are frequently overlooked, despite many being highly virulent, has led experts to refer to strict anaerobes as secret pathogens and invisible villains. At MicroGenDX, fungi are detected in some 20% of ENT samples.

Biofilms are difficult to culture — Bacteria in biofilm state can escape detection in culture-based sampling. As one example, a culture-impaired variant of Pseudomonas aeruginosa undergoes mutations that alter the bacteria’s outer-membrane lipopolysaccharide structure. Within biofilms, these lipopolysaccharide mutations markedly increase bacterial fitness. However, outside the protected biofilm environment, the mutations sensitize the variants to killing by a self-produced antimicrobial agent.

In this way, biofilm-mediated adaptation produces trade-offs that could limit the ability of bacteria to transition between biofilm growth and the free-living state. This produces bacterial populations that escape detection by culture-based sampling. The CDC and NIH have estimated that biofilm infections now constitute 65-80% of bacterial infections treated by physicians in the developed world. Read more about biofilms.

For instances where the infection is polymicrobial, enhanced antimicrobial resistance through cross-species synergistic relationships also renders antibiotic susceptibility conducted on the dominant isolate of limited value to antibiotic treatment selection. In addition, laboratory characterization suffers from differential gene expression observed in vivo versus in vitro, as well as presence of drug-resistant subpopulations.

In contrast, resistance gene identification facilitates the identification of potential synergism that may reflect the resistance potential of the microbial community responsible for the infection, thereby increasing the likelihood of the selection of an effective treatment strategy.

“Sometimes some patients truly do have bacteria in their urine that's not being picked up on regular cultures.”