State-of-the-art qPCR+NGS provides actionable diagnostics that can bring an end to the cycle of frustration and pain for patients with chronic non-healing wounds. Consensus guidelines from a Global Wound Biofilm Expert Panel include the use of DNA diagnostics in the first 1-4 days of chronic wound therapy as part of early intervention.

You need to know what microbiota are present in wounds that are impairing healing, and qPCR+NGS allows you to do precisely that. Bacterial proliferation and colonization lead to a sustained presence of proinflammatory agents that degrade the extracellular matrix, which in turn inhibits cell migration and prevents wound closure. Incomplete detection — or mixed flora culture results — offer physicians few options beyond guesswork and sub-optimal empirical solutions. In comparison, molecular testing can increase precise species identification some 20-fold, allowing you to select appropriate antimicrobial therapeutic options.

A more comprehensive microbial view affords the greatest potential of diminishing polymicrobial communities within this window. Based on a 1300+ patient study, the use of molecular-guided therapeutic choices resulted in substantial clinical improvements to both healing rates and healing days as compared to culture-guided choices. 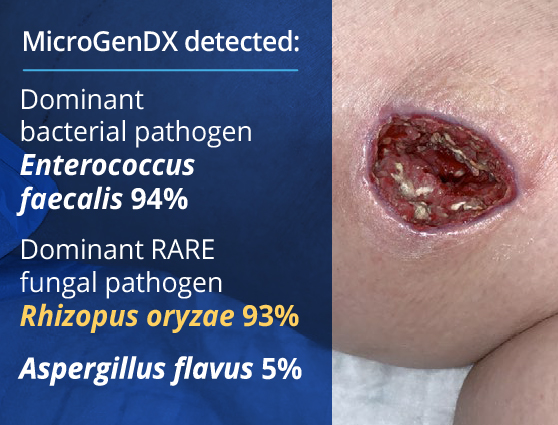 A young woman with type I diabetes, who had lost her kidney transplant a year previously, was hospitalized twice over six months with sepsis — the source of which remained a mystery. A large transplant surgery abdominal wound had been open for months, as had a heel pressure sore complicated by peripheral arterial disease, but both improved with better nutrition and regular wound care. The patient then presented with sudden left leg pain, swelling, and the rapidly ascending erythema characteristic of necrotizing infection.

Fasciotomies of her lower leg were performed, and her left medial thigh was opened to drain what appeared to be an abscess. The muscle was perfectly pink and only clear, odorless fluid was found. This fluid then showed no growth on culture. Although wounds improved initially with NPWT, the patient didn’t look or feel better, and within a week the leg wound had grey/black tissue that appeared to be necrotic.

The same fluid was sent to MicroGenDX for DNA analysis, which detected Rhizopus — one of several fungal species that cause mucormycosis, a serious but rare fungal infection with a mortality rate of 50%. PCR panels do not include this fungal species, so PCR-only testing would have failed to detect it, just as culture did.

Early detection and treatment are critical for the best outcome, and the transplant team was notified immediately. View case studies

Wound care: One of the most challenging healing tasks

Despite an extensive and thorough regimen:

qPCR+NGS is therefore quickly becoming the gold standard to support physicians in managing wound bioburdens and improving outcomes for all wound types.

“Over the decade I have used this technology, I have saved the lives of patients with unknown fungal infections.”