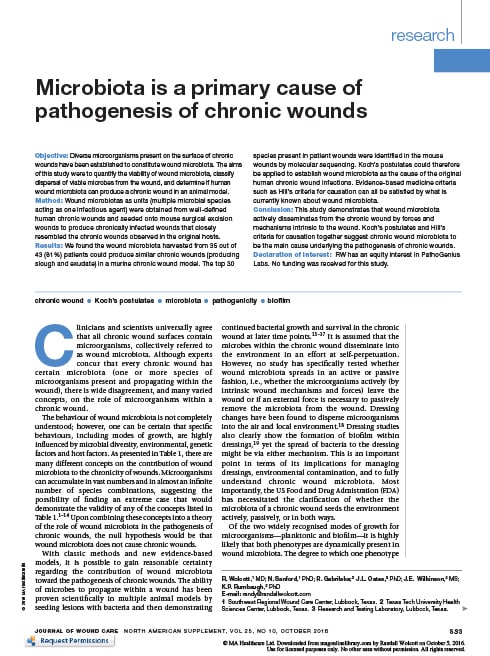 Microbiota is a primary cause of pathogenesis of chronic wounds. 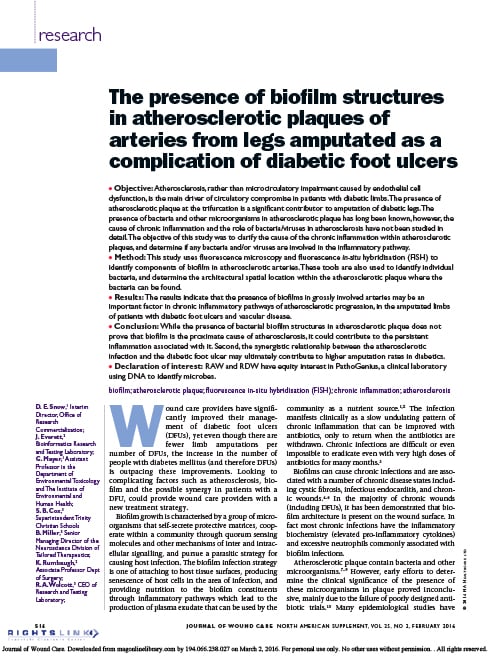 The presence of biofilm structures in atherosclerotic plaques of arteries from legs amputated as a complication of diabetic foot ulcers.

Research Article:The study used Fluorescence microscopy and fluorescence in situ hybridization (FISH) to identify potential inflammatory bacterial and viral components of biofilm in atherosclerotic arteries as an investigation into the cause of the chronic inflammation within atherosclerotic plaques of arteries from legs amputated as a complication of diabetic foot ulcers. The results indicate that the presence of biofilms in grossly involved arteries may be an important factor in chronic inflammatory pathways of atherosclerotic progression, in the amputated limbs of patients with diabetic foot ulcers and vascular disease. Read Article 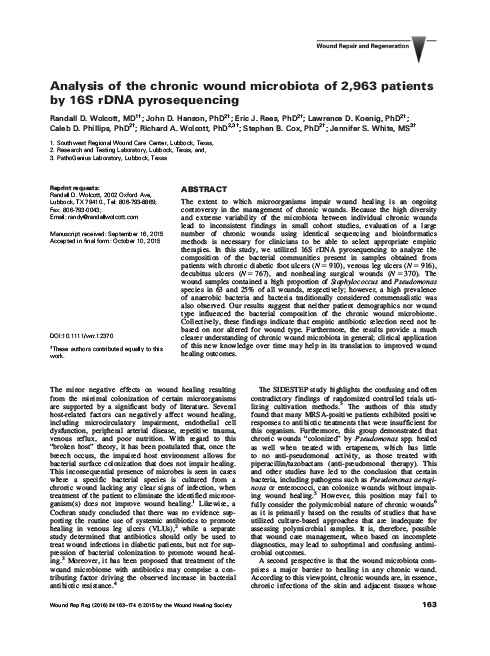 Analysis of the chronic wound microbiota of 2,963 patients by 16S rDNA pyrosequencing.

Research: The study utilized 16S rDNA pyrosequencing to analyze the composition of the bacterial communities present in samples obtained from patients with chronic diabetic foot ulcers (N = 910), venous leg ulcers (N = 916), decubitus ulcers (N = 767), and nonhealing surgical wounds (N = 370). All wound types examined in the study exhibited similar levels of microbial diversity and abundance at a genus level. Neither patient demographics nor wound type influenced the bacterial composition of the chronic wound microbiome. Staphylococcus and Pseudomonas were the two most frequent bacterial genera identified, however significant variability was observed in their abundance. Staphylococcus was the most frequent bacterial genus present in the polymicrobial communities of the chronic wound samples tested; of these, 40% were methicillin‐resistant. Pseudomonas spp. were present in 25% of all wound samples analyzed. Strict anaerobes comprised four of the top 10 genera detected in the chronic wound samples. Read Research 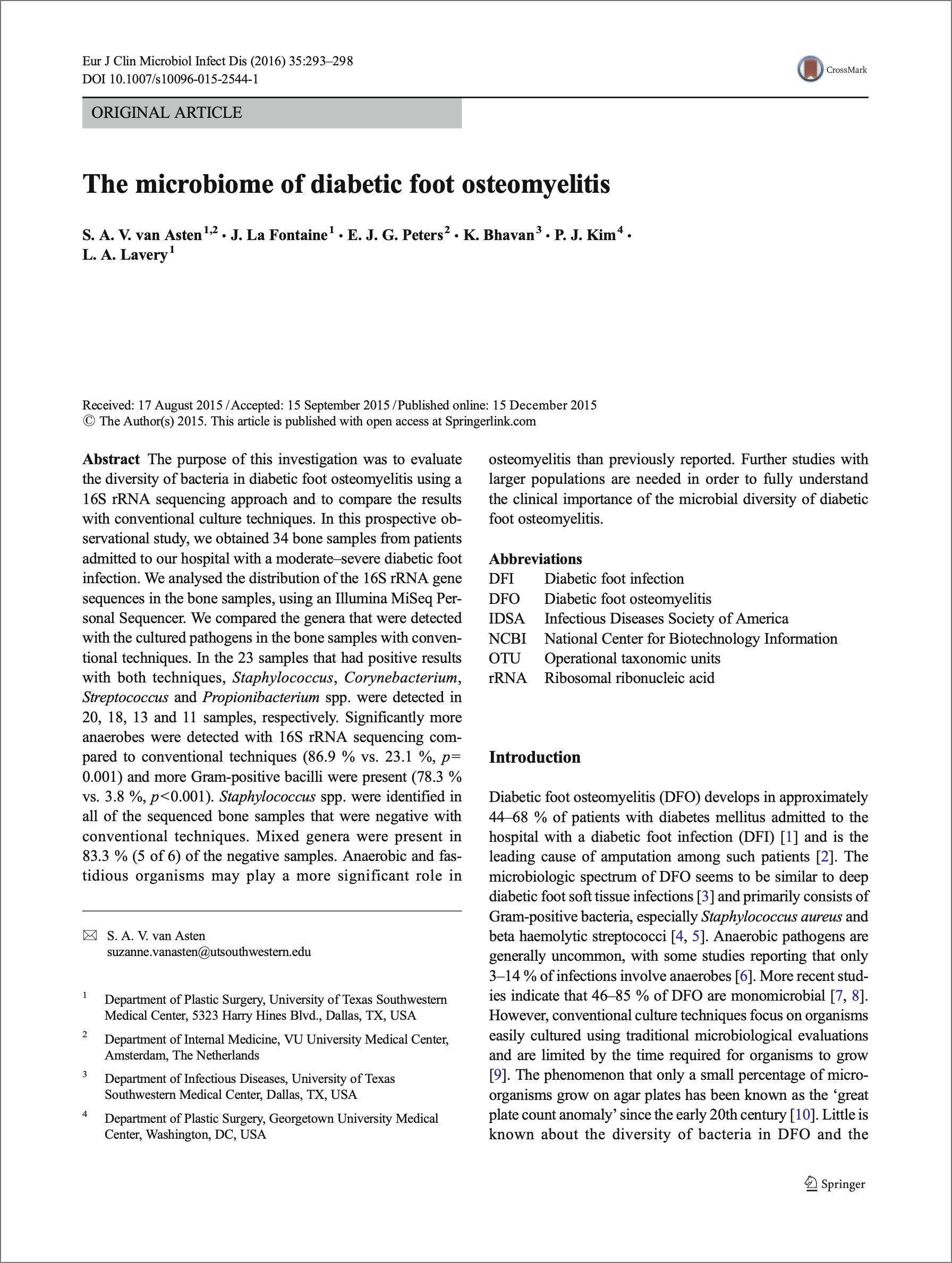 The microbiome of diabetic foot osteomyelitis

Comparison of culture and molecular identification of bacteria in chronic wounds. 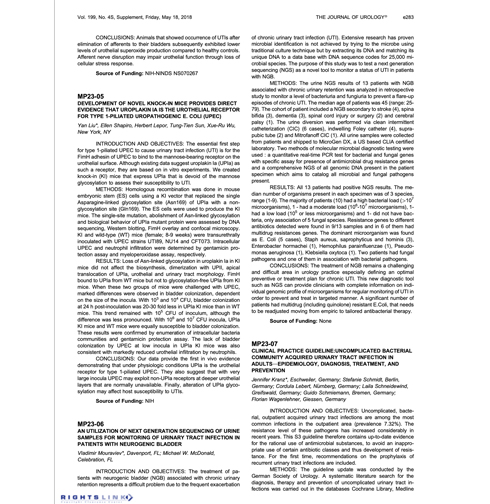 Comparative Study: Parallel samples from 51 chronic wounds were studied using aerobic culturing and 16S DNA sequencing for the identification of bacteria. Compared to 16S DNA sequencing, aerobic culture detected only half of the bacteria determined to comprise a dominant portion of the microbiota. At the genus level, molecular testing identified 85% (78/92) of the bacteria identified by culture. Conversely, culturing detected 15.7% (78/497) of the aerotolerant bacteria and detected 54.9% of the collective aerotolerant relative abundance of the samples. Read Study 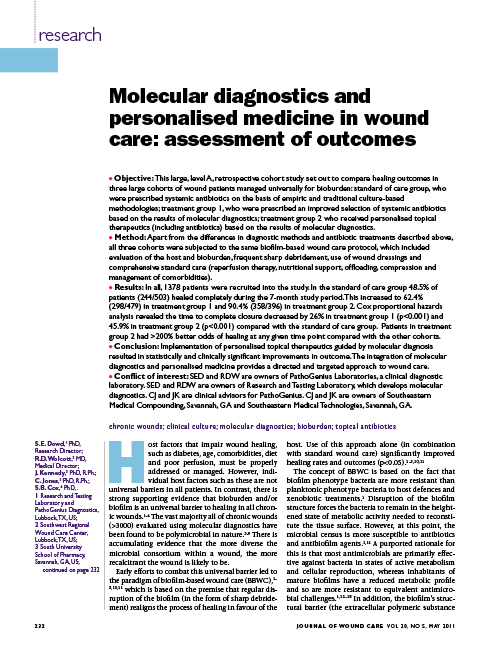 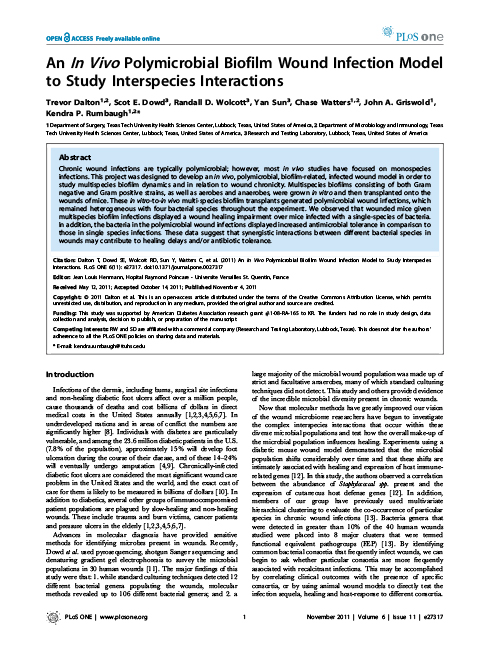 Research Article: Multispecies biofilms consisting of both Gram negative and Gram positive strains, as well as aerobes and anaerobes, were grown in vitro and then transplanted onto the wounds of mice. Wounded mice given multispecies biofilm infections displayed a wound healing impairment over mice infected with a single-species of bacteria. In addition, the bacteria in the polymicrobial wound infections displayed increased antimicrobial tolerance in comparison to those in single species infections. These data suggest that synergistic interactions between different bacterial species in wounds may contribute to healing delays and/or antibiotic tolerance. Read Article 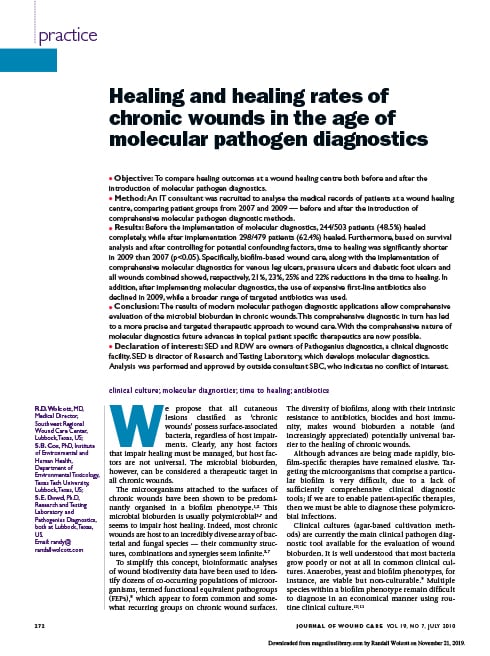 Healing and healing rates of chronic wounds in the age of molecular pathogen diagnostics.

Study: The study compares healing rates and healing time of two cohorts, one before implementation of molecular diagnostics, one after. Each cohort consisted of ~500 patients with various wound types. The introduction of molecular pathogen diagnostics, with a corresponding precise and targeted therapeutic approach, improved healing rates from 48.5% to 62.4% and reduced healing time by >20% across wound types. Read Study 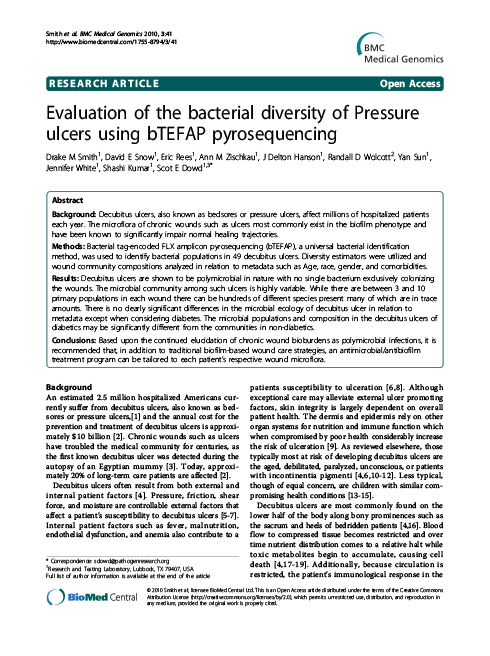 Research Article: Bacterial tag-encoded FLX amplicon pyrosequencing was used to identify the bacterial populations in 49 decubitus ulcers. Decubitus ulcers are shown to be polymicrobial, highly variable (228 genera identified among 49 ulcers) microbial communities dominated by 3 to 10 microorganisms, with obligate anaerobes found in significant proportion. In the decubitus ulcers of diabetics the microbial populations and composition may be significantly different from the communities in non-diabetics. The highly unique profile of each individual wound would require a therapeutic approach tailored to the patient's respective wound microflora and traditional culture is largely inadequate in determining the microbial composition of many chronic wounds. Read Article

Evaluation of the bacterial diversity among and within individual venous leg ulcers using bacterial tag-encoded FLX and Titanium amplicon pyrosequencing and metagenomics approaches.

Research Article: A pyrosequencing approach was used to characterize the microbial ecology of 40 venous leg ulcer (VLU) samples. Results show that VLU infections are polymicrobial with no single bacterium colonizing the wounds. The most ubiquitous and predominant organisms include previously uncharacterized bacteroidales, various anaerobes, Staphylococcus, Corynebacterium, and Serratia. Topological analysis of VLU show some notable differences in bacterial populations across the surface of the wounds, highlighting the importance of sampling techniques during diagnostics. Metagenomics provide a preliminary indication that there may be protozoa, fungi and possibly an undescribed virus associated with these wounds. Read Article

Research Article: A survey was conducted of major bacterial populations which occur in the pathogenic biofilms of three chronic wound types: diabetic foot ulcers (D), venous leg ulcers (V), and pressure ulcers (P). The study used 3 separate 16S-based molecular amplifications followed by pyrosequencing, shotgun Sanger sequencing, and denaturing gradient gel electrophoresis. The survey study revealed that a wide variety of bacteria with different physiological and phenotypic preferences are common as part of pathogenic biofilm communities in chronic wounds. However, different types of wounds may have different bacterial populations that are prevalent, such as pressure ulcers in which 62% of the populations were identified as obligate anaerobes. Culturing failed to identify major contributing populations, especially strict anaerobes, within the given wound types. Read Article 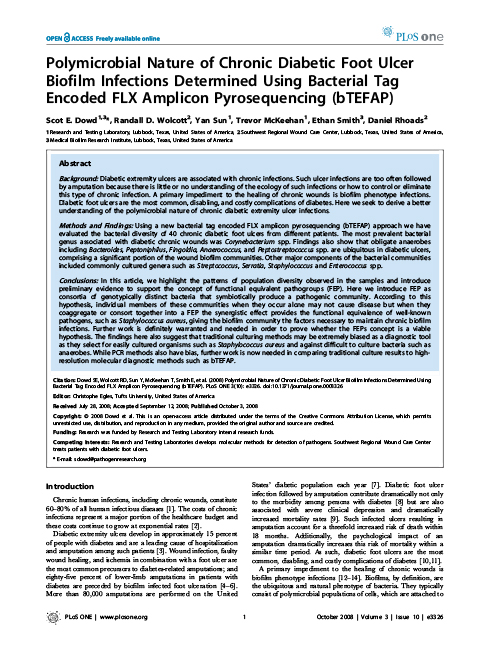 Research Article: A new bacterial tag encoded FLX amplicon pyrosequencing (bTEFAP) approach was used to investigate the polymicrobial nature of chronic diabetic extremity ulcer infections in 40 patients. The most prevalent bacterial genus associated with diabetic chronic wounds was Corynebacterium spp. Also ubiquitous were obligate anaerobes including Bacteroides, Peptoniphilus, Fingoldia, Anaerococcus, and Peptostreptococcus spp. Other major components of the bacterial communities included commonly cultured genera such as Streptococcus, Serratia, Staphylococcus and Enterococcus spp. We introduce the concept of functional equivalent pathogroups (FEP) as consortia of genotypically distinct bacteria that symbiotically produce a pathogenic community. Together, individual members may synergistically cause disease when in an FEP, giving the biofilm community the factors necessary to maintain chronic biofilm infections. The results suggest that traditional culturing methods may be an extremely biased diagnostic tool, as they select for easily cultured organisms such as Staphylococcus aureus and against difficult to culture bacteria such as anaerobes, which data suggests are ubiquitous in these diabetic extremity ulcer chronic wounds. Read Article