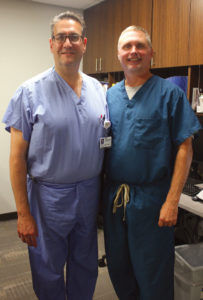 Dr. Dean Tortorelis (at left) and Dr. Joseph Cerny are pictured in their office at the Urology Associates group at North Memorial Health Hospital, where they are using innovative technology to detect bacteria that causes urinary tract and prostate infections.

Two physicians in the Urology Associates group at North Memorial Health Hospital, Dr. Joseph Cerny and Dr. Dean Tortorelis, have harnessed cutting-edge technology, used by National Aeronautics and Space Administration on the Martian Rover, to get a leg up on hidden strains of bacteria that are responsible for recurrent urinary tract and prostate infections.

The science behind the technology is far more earthbound than it sounds. Based in a laboratory in Lubbock, Texas, MicroGenDX is the innovative testing technology that has enabled Cerny and Tortorelis to offer patients a chance to cure their UTIs and prostatitis for good. The testing enables bacteria that doesn’t show on normal lab cultures to be detected, which means more effective treatments for patients.

The two are among the first doctors in the upper Midwest to use the testing, which was once used exclusively by the Center for Disease Control, NASA and corporations, before it was studied as a method of treating chronic infections by a doctor in Florida. More physicians are beginning to follow suit, thanks to Cerny and Tortorelis putting it to work at their clinic.

Many people, most predominantly women, suffer from UTIs that appear to come back every few months in spite of rigorous rounds of antibiotics. According to the physicians, in reality, that infection never actually left the body.

“For patients who have been told ‘your culture was negative, you’re just having symptoms,’ this is another test we can run to really see if there might still be some bacteria there – it just didn’t grow by conventional means. We run this test and we find something in there that we can treat,” Cerny explained.

The testing is covered by Medicare, meaning the advanced technology is available to everyone.

Tortorelis said that for people suffering from infections that return after multiple antibiotic treatments, it can mean regaining their lives.

He said prostate infections can be especially difficult when they recur.

“Once they become chronic, it really affects a man’s life. They have pain, they can’t work effectively, they can’t sleep, and it really causes a big problem for them,” he said.

Being able to identify bacteria that wasn’t appearing in normal lab cultures has brought its share of surprises. There are around 25,000 different types of bacteria in the world, and sometimes, the ones that show up in the tests have stumped Cerny.

“There’s a library that consists of thousands and thousands of bacteria. I’m getting results back on bacteria that I’ve never even heard of – I didn’t even know they existed,” he said.

The testing borrows from the human genome mapping that began several decades ago. People eventually began mapping the DNA of bacteria, and with that information, the tests allow doctors to identify the genetic markers of certain types of bacteria that simply don’t show up in the traditional microbiological culture.

There is a chart of antibiotics that corresponds with many of these never-before-detected bacteria causing the infections, with options for the corresponding antibiotics relying on a patient’s allergy history, type of infection, and bacteria present. Someone allergic to sulfa drugs, for example, can be provided with a compatible antibiotic based on the chart.

As for the NASA connection, it speaks to a fascinating history of the technology’s use. Before launching the Mars rover into space, NASA wanted to be sure there were no bacteria contaminating the vehicle that could unwittingly be carried to another planet. The parts were sent to the laboratory in Lubbock, where each part was swabbed and tested with MicroGenDX technology to ensure it was sterile before being shipped back to NASA to be launched. Most of the applications until the doctor in Florida publicized his UTI study were otherwise corporate or used by the Center for Disease Control, which can’t perform the tests on as wide of a range as the Texas laboratory.

Although they can only speculate, the two Robbinsdale physicians who helped introduce it to the Midwest are optimistic about what the future holds for the testing.

Tortorelis said it’s only the beginning.

“We’re just scraping the edge. We’ll see what we’ll be able to find in the future. Maybe we don’t need to detect just the bacteria; maybe we can look at the ribosomes or sub-cellular content of each bacteria. I think it’s a promising start,” he said.

Cerny expects the cost of the testing to continue dropping as it becomes more of a fixture in every physician’s treatment artillery.

“My guess is that these tests will become cheaper. They have become more available,” he said. 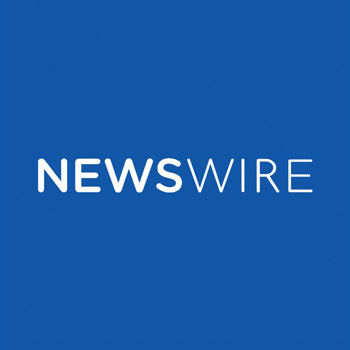